Who Built the Most Cell Towers in the US Over the Last 6 Months?

In an effort to determine what impact Covid19 may have in the future on the development of cell towers, we looked at FCC data for new granted and constructed Antenna Structure Registrations over the last three to six months.  This will set a baseline to compare with future quarters.  Here is what we found on what happened through March of 2020.

First, we examined which tower companies and wireless carriers have been most active over the last 3 months.  Noticeably, Verizon was the most active. The numbers though are deceiving in that many of AT&T’s site builds are being done by Build to Suit partners including some of the other tower companies on the graph below.  It is also important to realize that some of the towers built in the last 3 or 6 months are sites where AT&T is relocating their equipment from an existing tower to the newly built tower.  These are known as build-to-relo towers. 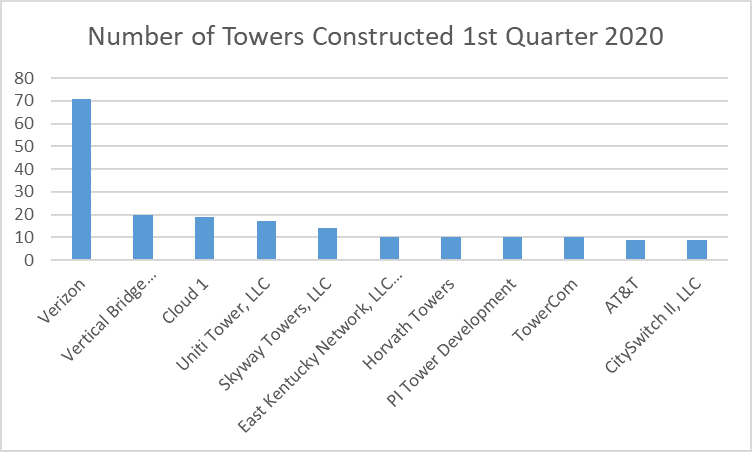 Next, we looked at the last 6 months. 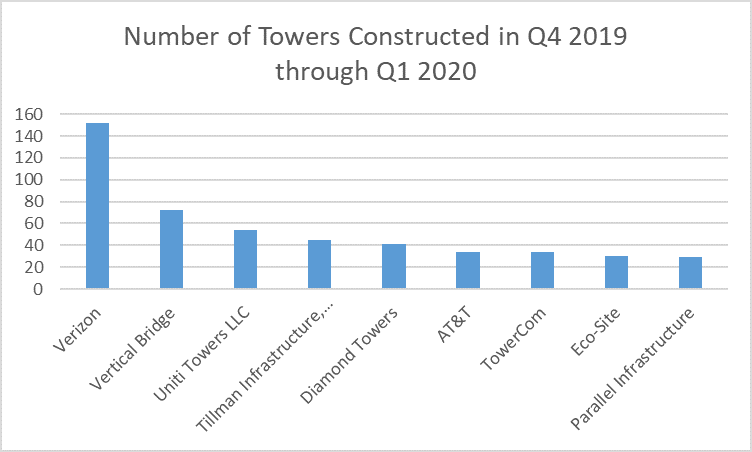 The results are pretty similar although there are tower companies that have decelerated their build plans in the 1st quarter 2020, notably Tillman Infrastructure who was third over 6 months, but absent in the top 10 entirely in the last three months.  As you may remember, we wrote about Tillman Infrastructure’s efforts to build towers near existing towers so that AT&T and Verizon could relocate to the new towers.  The graph below shows the drop off over the last three quarters for Tillman.

Does this mean less “build-to-relo” type towers?  Not necessarily as some of the other known BTR tower developers are still building towers adjacent to existing towers.  However, it may reflect fewer towers from Tillman.

Not surprisingly, many of the towers built over the last 6 months were built in the southern states including Alabama, Florida, Georgia, Texas. 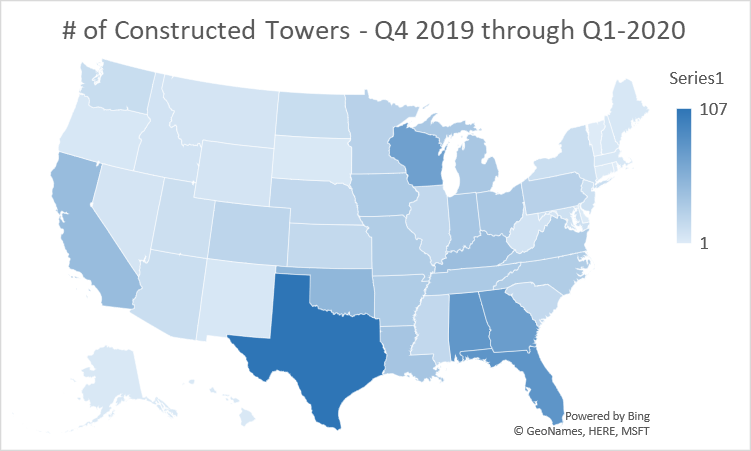 This is likely the result of three factors.  First, construction is muted in northern states during the winter due to the weather.  Second, zoning is limited in more rural states and build-to-relo companies typically can’t build new towers near existing towers in areas with more restrictive zoning.  Third, there are multiple wireless providers who are expanding their rural coverage within the southeast.

Looking for a more detailed analysis regarding recent tower construction?  We have a phenomenal database of tower location data and unique expertise with which to evaluate tower related data.  Contact us for further information.